Home Excursions Tour of the city of Tyachev
0
(0)

Visiting the main attractions of the city will not take much time. In the center Tiachiv’s two ancient ones are located nearby temples. First you should familiarize yourself with Catholic church The Holy king Stephen, which was built in 1780. On the tower of the Church you can see the clock. However, it is not real, but painted: this is a common practice in Transcarpathia, because not every community could afford to buy expensive watches. The clock above the Church served not only to tell parishioners the hour, but also to remind them that every moment could be the last in a person’s life.

Nearby is the oldest and most elegant church in tyachevo-Kamenny reformed temple with three tiers belfry. It’s a real watch, and it’s very old. Inside temple’s you can admire a good caisson polychrome ceiling from 1748. In addition, the Church has two steles carved with the names of dead parishioners in First and world war II. The temple was founded in the XIII century by king Ladislaus the Great. It was Roman Catholic then. In 1556, the Church became a reformed Church. Until 1944 it housed the largest library Maramoroskyi. ЗThe walls and Windows of the 13th-century Church building are preserved. The reformed Church looks very beautiful in may, when the chestnuts are in bloom.

The reformed Church has a bronze bust to the artist Shimon holloshi,who lived in tyachevo since 1914. A spire is also visible nearby Greek Catholic Church, which was built in 1852 in honor of the assumption of the blessed virgin Mary. It is located near the bus station. In 1948, after the Soviet government banned the Greek Catholic Church, the Church was transferred to the Orthodox community. Today, Greek Catholics hold services there again. 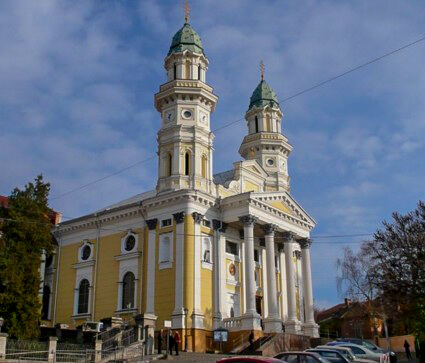 On the way to this Church, on Lajos Kossuth street, there is a monument to Lajos Kossuth himself( 1802-1894), an outstanding Hungarian statesman, revolutionary and lawyer, Prime Minister and President of Hungary during the Hungarian revolution of 1848-1849.

Tour of the streets of Hust