It is difficult to imagine that in the Transcarpathian traditional village there was no churches until the end of the XIX century. Therefore, it seems plausible stories of old-timers that already in the early XIX century (1814) on the hill was built Sand from fir wooden church.Apparently it was from that Church that the bell with the date “1815”remained. What happened to this temple is still unknown. At that time the village had 11 families

At the end of the XIX century in the village of Yalovoe was built a Church that has survived to this day Ascension Of The Lord. According to another legend, the Church of the ascension was built in 1803, and in 1883 it was moved to its current location.

In this Church, the master slightly lengthened the frame of Babinets, but did its already for the log Navi. The Navi log is also wider than the five-sided altar part churches. The building has one high roof, which seems to unite all three spaces of the Church. The tower of the Church is completed with a bullet-shaped dome and a round top, which is located on a rectangular blind light. The visor, supported by brackets, encircles the entire the Church, passing on the Western facade to the porch. Considering the fact that such porches are not a mandatory element of a Church building of this style, we can assume that the porch was most likely completed later. Fortunately, the porch isn’t very spoiled the overall appearance of the Church. On the southern and Northern walls of the structure are located the Windows are arched, and there is a round window on the Eastern wall of the apse. The ceiling of the canopy over the stairs at the entrance to the Church is painted in blue; in blue the stairs themselves and the columns on which the canopy stands are painted in color. The Church is active, so and no wonder they are in good condition.

Opposite the entrance to the Church is a beautiful wooden two-tiered bell tower. Square in plan, with an open loghouse of the lower tier, with two halls and a hipped roof, which is crowned by a dome,it is also painted in blue. In the log house of the upper tier, arched voice boxes are cut through. Above the first tier there is a fear, the second ends with a low head of Baroque shape. Almost under the roof of the bell tower on the West and East walls there are three arched Windows, and on the North and South walls-one window of the same shape. In the first tier of the bell tower, on the East side, there are also arched doors. 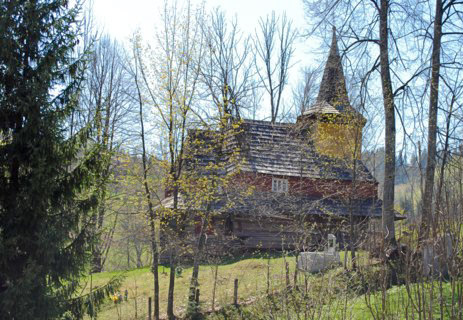 The Church of the ascension is built from Smereka. It is located in the very center of Yalovo, on a hill (GPS: 48.7651826, 23.0387448). The shingle roof was replaced with a tin roof in 1930. But this reconstruction did not greatly affect the appearance of the temple, since only the roofs and the walls were covered with tin. In the early 1900s, another reconstruction of the Church of the ascension was carried out by the talented architect Ilya Nemets, who built a beautiful Church in the neighboring Zadil’s’ke.

The interior of the temple is divided into three parts, which are covered with arched vaults. Between the Babinets and the nave of the Church is a high, shaped profiled passage. Old-timers claim that the iconostasis in the Church of the ascension was moved from a dismantled wooden temple to Volovets. I purchased several icons and the Tsar’s gate from the Church Transcarpathian Museum of local lore.

The last renovation of the temple in 1991 was not successful. Log cabins were robbed pressed cardboard, the choirs enlarged and propped up the structure with a huge metal channel, and some “artists” redrawn the iconostasis.

St. Michael’s Church in the village of Ivashkovytsya

Tour of the streets of Hust

Church of the ascension in the village of Tishev

Amazing temples in the village of Chetfalva