The idea to perpetuate the famous artist appeared in Mikhail Kolodko in 2011. It took the author a whole year to implement the idea. The author installed his masterpiece on the triangle between Vakarov and Podgornaya streets in the very center Uzhgorod’s (GPS 48.62579727 22.30283165).This sculpture was made in the form of an SUV “Willis” (GAZ-67) – a car that the famous artist Gabriel Gluck liked to drive. Set on a pedestal in the shape of a stone block. In the car behind the wheel, Gavrila Martynovich himself is recreated, and next to him lies an easel and a painting «Woodcutters», which brought fame to the artist.

The monument was opened on the anniversary of the death of the recognized artist on November 2 2012. Mini-monument to the artist in Uzhgorod, where he lived from 1947 to the death in 1983, established at the expense of relatives.

Gavrilo Gluck is a well-known Ukrainian artist. During its he lived his life in many countries: in Moldova, Hungary, Czechoslovakia and in the end Ukraine. He went through a difficult life path. He was considered “undesirable” and oppressed army duties. However, all these difficulties allowed the painter to open up better. Most of all, he liked the magical Transcarpathia. Most of the author’s paintings are landscapes and portraits. The most famous of his paintings are the already mentioned “loggers”, for which he was awarded at the international art exhibition in Brussels.

An interesting legend about this mini-sculpture is told in his book “Uzhgorod – the world capital of mini-sculptures” Nadezhda Popadyuk. Legend has it that one once in 1954 in Uzhgorod before the glitch turned an interesting stranger with a figure, which would be the envy of the heroes of the myths of ancient Greece. My husband said it was a big deal for him what matters is the perfection of relief and form and asked to paint a portrait in the image, in which the artist will see it in his imagination. The next day, at the appointed time, the stranger appeared in Gluck’s workshop and Gluck, without explaining anything to him, handed it to him a long stick, asked to lean on it and not move for an hour, and began to write. The artist was concentrating on the canvas, suddenly stopped and exclaimed: “Willis on a pedestal”!!! The stranger did not understand, but asked quietly what had happened. Gluck looked him steadily in the face and said calmly: Willis is my favorite the car, and you look like it and turned the easel with the portrait of her husband. See his frightened eyes, Gavrila Martynovich laughed and said that he was joking, and then he exclaimed again: “You are a logger, a real logger in my imagination”! The man thought that the artist mocks him, so perfect and perfect, so he throws him to the ground his props and quickly ran out into the street.

This is how a remarkable portrait of a stranger was born. Gluck’s work “Loggers”, which brought him worldwide fame and high awards.

A few years later, walking through the city of Uzhgorod, at the intersection Vakarova and Podgornaya streets, Gluck saw a mini-sculpture on a stone pedestal, as he got closer, he recognized it as his favorite Willis SUV, in the back seat of which was his legendary painting “lumberjacks”. Shocked deeply Gavrilo Martynovich realized that the guest, who hastily escaped from his workshop in 1954, not taking his portrait, was a sculptor who loved the perfection of the relief and the form and gave that gift to his beloved city, genius has immortalized forever. 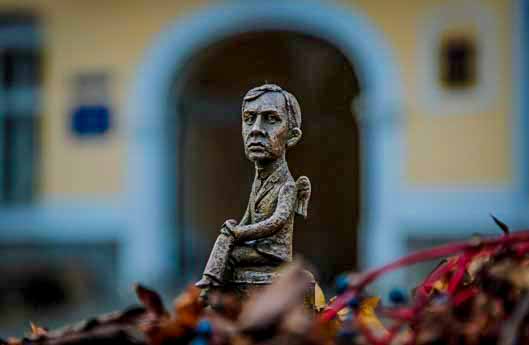